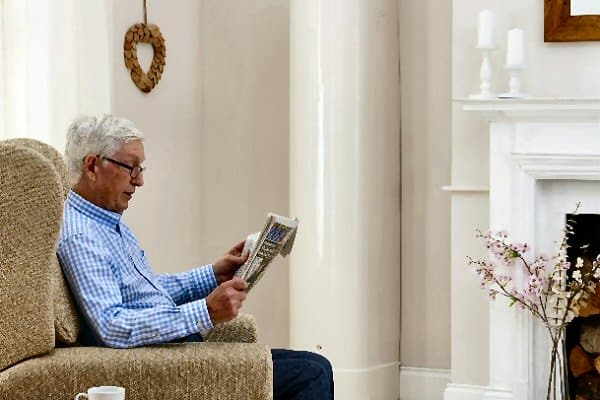 Three appliances from Cannock and Chase Terrace were mobilised to a blaze at a house in Haig Close, Staffordshire just after 1am on Thursday, May 9. Firefighters entered the building and the resident was found in the kitchen. He was then removed by ambulance staff after they treated his injuries at the scene.

The accidental fire had started in the living room and the smoke alarm had been activated. The Service was alerted to the situation by a care-line system and when crews arrived at the property, the fire had been extinguished by the Personal Protection System UltraGuard. The resident suffered burns to his left shoulder and chest area. He was taken to Royal Stoke Hospital for assessment and was awaiting transport to Birmingham for further treatment.

Simon Craythorn Station Manager said, “Following a number of visits by our Prevent Officers since 2012, and working alongside partners, the resident was deemed to be at high risk. A care plan had been put into place that included the installation of a Personal Protection System, which had operated successfully, extinguishing the fire quickly and saving him from further serious injury.

Following a Fire Investigation, we believe the man fell asleep whilst smoking on the sofa and the cigarette dropped and set the nearby pillow alight which then spread to his clothing.

Sadly, this man had reduced mobility and would therefore have struggled to leave the building on his own. Mobility issues, along with smoking and being elderly form part of the SAME campaign. This campaign highlights the four factors which increase the likelihood of dying in a fire. These are: smoking, alcohol, mobility issues and being elderly.”