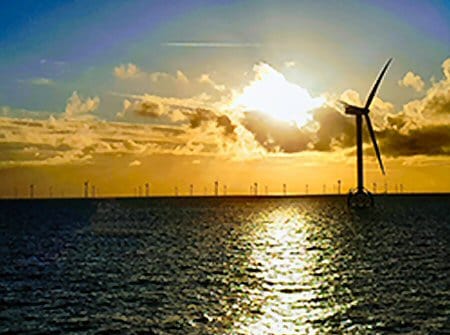 Throughout history, communities have harnessed the power of wind. Driven by the need to reduce greenhouse gas emissions and secure home-grown energy supplies, wind energy is the world’s fastest growing renewable energy. Being one of the windiest country in Europe, Britain could power itself several times over using wind. Britain accounted for more than half of the new offshore wind power capacity built in Europe last year, as the sector broke installation records across the continent.

Surefire Hit the WavesSurefire support one of the world’s leading wind power developers with preventative planned maintenance to their fire suppression systems. Surefire Technicians had to undergo rigorous training courses and tests before they were allowed to be transported across the Irish Sea to each turbine.

With some turbines almost as large as the Shard, specialist courses and tests had to be completed such as working at height, rescue, escape equipment and marine intensive training to ensure that our technicians could work safely. Part of the course included a 3 metre jump into a simulation pool with a wave machine and in darkness. Surefire Technician Mark explains “We are completely dependent on the weather as we can only sail out the turbines if the wind speed is less than 12 metres per second. In the Winter for when sea temperatures hit below 12°, we also have to wear marine survival suits so that we are prepared in case of an emergency”.

Surefire maintains windfarmsEvery day poses new challenges when working out on the turbines, but the technicians do get to see a variety of wildlife such as seals and dolphins. Even the turbines are awe inspiring as they litter the skyline.